Some of the most panicked calls that Hollywood exterminators receive, are from restaurant owners. Hollywood and the Los Angeles areas are not immune from getting bugged by pest. The demand for best control services in Hollywood rises around this time a year as it starts to warm up outside.

No one wants cockroaches, ants, spiders, or creepy crawlies to infest their restaurant and workplaces. But restaurant owners bear a special responsibility — and can pay a special price — if an infestation gets out of control.

According to a poll conducted by a major pest authority, 30% of survey respondents would leave a restaurant — and never come back — if they saw a cockroach. Even more disturbing (from the restaurateur’s perspective), 60% of diners would tell 3 to 5 people about a restaurant pest sighting.

Whether your chef noticed a mouse in the kitchen; or your waiter noticed termites or other insects crawling around behind the server area, you need to act, and fast. Not only can pests make your restaurant gross, but they also carry diseases and create public health risks.

Mice, rats, and insects carry awful bacteria and viruses, which can be passed on to your staff and to customers through the food or through other means. Restaurants tend to be natural habitats for these creepy crawlies, since they offer moisture and plentiful food. Common intruders include rodents (like mice and rats), beetles and weevils, cockroaches, and flies.

Flies are actually the top disease transmitters on earth. These filthy drosophila can drop staphylococcus, e coli, and other bacteria onto food and other surfaces just by landing on them. Fruit flies are no different either.

Beetles and moths and other “creatures that hatch” can hitch a ride in boxes of food and in crates or storage units. You might not even know that you have a beetle problem until a sous chefs goes to get an exotic ingredient for a dish and discovers — to his horror! — an infestation.

Rodents are surprisingly adaptable little pests. They can sneak in through small holes and take up residence deep in the bowels of your building, transporting bacteria, snatching food, and terrorizing your customers.

Cockroaches carry bacteria that can lead to food poisoning and diarrhea. They can be particularly hard to kill. They can survive incredibly long stretches of time without eating, and they can live off of dust and garbage.

If you have a pest problem — or even suspect one — you need to act sooner than later to clean it up and put in place a preventive pest control plan. Call a leading pest control and the pest exterminators at Matrix Pest Extermination for a free consultation. We can dispatch your bug problem and prevent it from coming back. 1-800-596-0313

You invested so much time into building a great Hollywood restaurant — one that people truly treasure. Protect that investment by smashing the infestation before the bugs put you out of business. 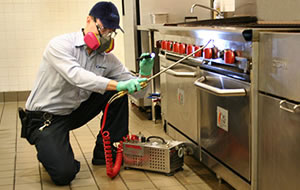